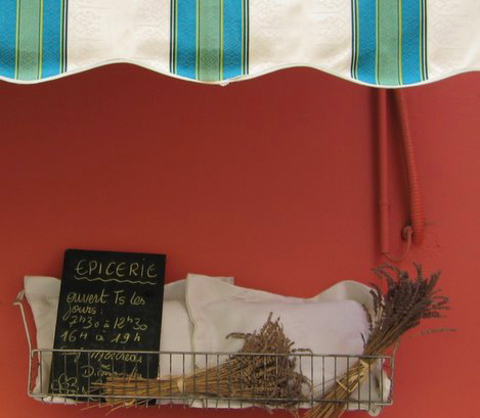 s'en foutre (sohn footre) colloquialism
not to give a @#!!

The word "clafoutis" comes from the old French "claufir": to attach with nails. Perhaps all those cherry "heads" that cover the creamy flan-like dessert look like clous.* I don't know.

As for "attaching with nails," well, that's one way to stick to something! Speaking of sticking, whether like glue, or cement, or even spat gum to a rubber sole, I can't say that I have followed through with that food blog* that I began a few months ago....

Which brings me back to cla"fout"is and another word hunch: s'en "fout"re ("to not give a darn"). But I do give a darn, a clou, and even a stick (make that a chop chop)! I do want to chronicle on croquettes, crêpes, and the metaphysics behind French home economics.

While perusing the handwritten cookbook that my mother-in-law wrote for me, I came across several temptations. Still, I admit to being more tempted by the pretty French words than by the cooking effort ahead of them. Have a look:

Time now to vote! Please help me to decide what to bake, burn, or blog about next. Tick, check, cochez,* or give a quick "souris* peck" beside the recipe title that most intrigues you.