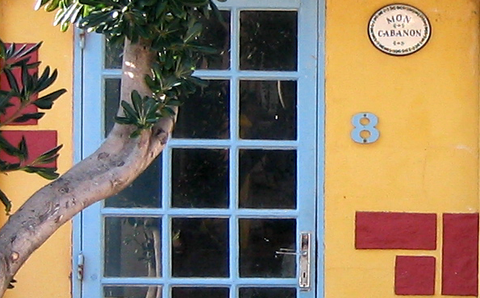 Don't miss part I of this story:
http://french-word-a-day.typepad.com/motdujour/2006/01/tablette.html

I looked over to discover his eyes for the first time: a shade of blue mimicking the waters off the coast of Brittany when the sun casts light across its surface. I noticed his skin, rippled like the vagues* that rush in with the morning tide. I thought about our space suits, not the silver combinaisons* that astronauts wear, but the bodies that we inhabit. How time erodes them! Forty
years separated us, the measure, but a speck in the cosmos. When my eyes refocused, I saw a boyish face on the man in 24A. The wrinkles were gone, the white hair now foncé.*

He told me that he had 'escaped' from his nursing home in Fréjus and was headed to Vegas. I learned he was from Brittany, retired from the shipyard and that, as a child, he herded sheep out to pasture. "It was the best time in my life," he said, "far away from la foule.*"

When his story slowed and the tremblements* left his arms I said: "La foule upsets me, too," and shared a few personal misadventures, times when my body betrayed my own mind or vice versa, when a crowd swelled to monster size and suddenly, unexpectedly--

"I passed out in the Paris Charles de Gaulle airport once," I admitted, explaining that the combination of so many foreign voices, the grilling from the stone-faced and gun-toting security guards combined with hunger and fatigue had me 'falling into the apples'* as the French say, or fainting.

Warm, soft hands, weather-beaten from 79 summers beneath the northern sun now held my own. For a moment, and for two unquiet strangers, the reality of travelling in cramped quarters with so many people was forgotten. The man in 24A had asked permission to read my palm. Next, he told me I would live a long life.

When the beverage cart came to a halt for the last time, he said: "No, merci." That's when he asked me for a date by way of the most original proposition that I have ever received.
"Can we meet at 11:30 Saturday night?" he said.
"11:30?"
"Yes. Onze heures et demi.* Just think of me, and I'll think of you--for half an hour. I'll send positive energy your way. It will work. I practice télépathie* with the student interns at my nursing home. They get nervous about their upcoming exams and so I send them healing thoughts."

I met an octogenarian who escaped from a French nursing home and hopped a plane to Vegas. He said he hadn't found security or happiness in confining himself from the world. That a sheltered life, finally, was no life for him. That, scared as he was to mix with 'la foule,' he had to do it. His words could have been my own. His adventure was beginning. And so was mine.

Books on the French language:
Tune Up Your French: Top 10 Ways to Improve Your Spoken French
Words in a French Life: Lessons in Love and Language from the South of France
The Ultimate French Review and Practice: Mastering French Grammar for Confident Communication
Mastering French Vocabulary : A Thematic Approach