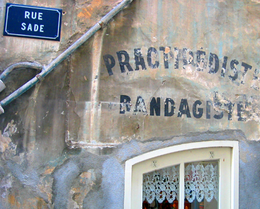 A bandage maker along rue Sade...

Words in a French Life continues to ship and is now arriving in stores across the United States. I only wish I could see it on the shelves! From the French countryside, I try to imagine my book in some American librairie.* If you haven't seen it, please ask for it at your local bookstore. Merci in advance for helping to spread the French word!

A Day in a French Life...
I once had a date with a New Yorker named Eddie who said to me, "In love, never compromise yourself." We'd just gotten off a private yacht in the ancient port of Rome, having toured the island of Ischia, then to fly to London and board the Concorde. But supersonic planes and sleek boats were not in The Plan for me; instead, one simple Frenchman with a third-hand Honda was. (As was a lifetime of com-pro-me.*)

When Jean-Marc, now eight cars into our relationship, began painting over our front gate, I spoke up. "You should décap* it first!"
"It's okay," he assured me, rubbing the wet paintbrush into the chipped paint.
"I brushed away the big chips and what remains will fall off in the process."
Looking over to the can of paint and the extra paintbrush, he smiled and said, "Painting is better à deux."* I took the hint and picked up the brush, accepting The Paint Chip Compromise.

The way we were painting--ignoring the little (and sometimes big) chips that remain--is what I call putting a bandage over things or finding a temporary solution to a bigger concern. I stopped to reflect on compromise and bandages and all of the things we'd covered up in the years since our Franco-American union began: a bleeding heart from having left loved ones behind in the Arizona
desert to forge a new life in France... bandaged; the gaping wound in one Frenchman's soul upon leaving his windswept city by the sea, never to be returned to when his American bride preferred the slow pace of country life. Bandage that. And there were so many little compromises that cut all the same: limiting the number and length of telephone calls home to the States, cutting up my credit card for a French debit card (credit is not as popular in France) and the tightening of the belt that followed, foregoing a 5:30 dinner hour for an 8:30 French souper*... to name just a few sore spots.

Having bicultural children opened up a whole 'nother box of pansements.* Raised Born Again (try explaining that to the French!) we would eventually have our two children baptized in the Catholic church ("But you're not even Catholic!" I protested to Jean-Marc as he was making the baptismal arrangements. "Tradition!" he explained. When I wanted to name our son "Evan," Jean-Marc retorted, "The French will call him 'Heaven'. And they wouldn't be wrong about that, I've always said, as my now ten-year-old "Max" is positively divine.  For certain issues (some intercultural, some not) I found that a bandage wasn't enough. I often needed to plaster those gashes shut.

I've spent a lot of time wondering when the deep covered cuts--or biggest compromises--would open again like unstitched wounds. When will Marseilles reclaim its most passionate citoyen?* When will the desert mirage return again with my chasing after it, thirsting for my Arizona roots? So far, most of the pansements have held. Only a few have needed retaping. Perhaps I can rest assured now?

With all the bandages, I'm sometimes amazed to see that we are not broken apart. But then, isn't that what Band-Aids are for: to hold us together?

Whether you're learning French for fun, school, or work, 2,000+ Essential French Verbs makes everything simple-conjugations, tenses, irregulars, and even conversation.