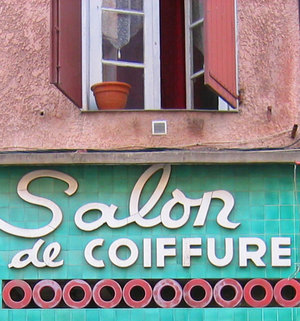 Like "fifille," "mémère" is a somewhat old-fashioned and informal word, used as a term of affection--"old dear"--when not uttered in a teasing way: "That hat makes you look like une mémère!")


Photo: A former mémère hangout in our village.

In Quebec, "mémère" refers to a chatty, indiscrete person (read: a gossip!). There is also the verb (used, again, in Quebec) "mémèrer": to gossip.


A Day in a French Life...
The Petit Larousse, not one to mince words, defines the French word "mémère" as "a woman, quite plump and old."

"Doesn't make sense," I think, shutting the dictionary and returning my gaze to our puppy which is not quite a "woman" -- not even in dog years. As for plump, it is true that she is not exactly mince,* our little golden, who has taken to licking the sauce-laden plates along the bottom rack of our dishwasher while her mistress's back is turned.

"Mémère!" the French say, squatting down to puppy level, stroking the furry dos* of our dog. "What big pattes* you have!" they coo. All the fussing and sweet talk reassures me that the word "mémère" is, finally, a term of endearment.

Somewhat heartened, I wanted to believe it was an endearing term that my daughter was using last week when she pinned the title "mémère" on ME (and not in a cooing or fussing tone, but a snickering one).

"On dirait une mémère!" You look like an old lady! she had said, pointing to my one-piece maillot,* referring, je suppose,* to the one-pieceness of it all, as if a one-piece swimsuit was synonymous with "granny" -- never mind that the one-piece in question did not sport oversized pastel flowers or thick shoulder straps. That said, let it be a lesson to me to never again shop for a maillot at a lingerie boutique where, it appears, some of the swimsuits on the rack are geared toward customers with special needs, you know, those having to do with lifting and tucking. In the meantime, and, like our puppy, I will need to be trained to quit licking plates.

From Entre Nous by Debra Ollivier
"American women may gobble up self-help books and careen from weight-loss scheme to spiritual makeover, but French women simply seem to know themselves, to understand what works in their lives and how to get it." (More here.)

References to the French term mémère in litterature:
This Is How We Do It: The Working Mothers' Manifesto by Carol Evans
"...returned to work just two weeks after delivering Bob, while her mother (Mémère, as the French-Canadian Coulombes called her) watched the baby."

Minor Characters: A Beat Memoir by Joyce Johnson
"...On the phone he made excuses to Memere in French."

New Orleans in the Thirties by Mary Lou Widmer
"...My Mémère had grown up speaking French..."

The Family Communication Sourcebook by Lynn H. Turner and Richard L. West
"... Franco American community and a collection of stories about grandmothers (memeres). She observed that these "memere stories" narrate the family times ..."