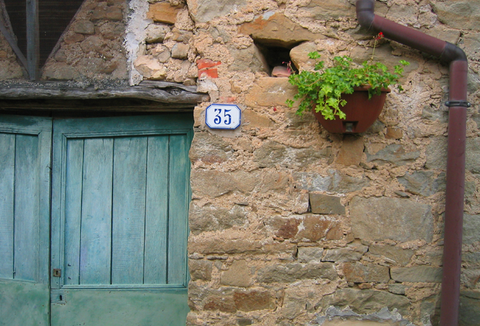 For draining the tears of the Ligurian heavens. Une gouttière in Ceriana, Italy.

Stray (or "alley") cats in France are called "gutter cats" or "les chats de gouttière." Read the story of one here:

Max: A Griggstown Mystery / Un Mystere de Griggstown In English and in French. A long missing tabby cat tells the story of his disappearance, mishaps, and adventures along the Delaware and Raritan Canal. Strange encounters with other creatures, great and small, teach Max things about himself, and how to leave the past behind.

Don't miss the story of a wayward French gouttière, a few thirsty begonias, some tart neighbors and the sweet lemon madeleines that bring a few would-be enemies together. Read Words in a French Life (where you will also find the raison d'être behind this blog ... and this burgeoning French life).

Related Terms and Expressions:
goutter = to drip
une gouttelette = a tiny drop, droplet, globule
la goutte de rosée = dewdrop
tomber goutte à goutte = to drip
pleuvoir à grosses gouttes = to rain heavily
boire la goutte = to have a nip
les gouttes pour le nez = nasal drops
la goutte de sueur = bead of sweat
avoir la goutte aux nez = to have a runny nose
ne...goutte = not at all  Ex. n'y voir goutte = to not see anything
...and the next time you are in a French café, you might ask for "une goutte de lait" or "a drop of milk" in your coffee. (In which case you wouldn't be ordering a big café-au-lait, but a smaller "noisette"--une noisette at that.)

In Magazines:
France Today features different regions of France with practical travel tips & suggestions for where to eat & stay, where to shop & play, as well as features on food & wine, cinema, culture & French products available in the U.S.A.

Cuisine Et Vins De France (printed in French) features dozens of recipes in each issue along with articles on wine, cheese, appetizers, table decorations, and more.

Hear Jackie sing the song (replay it for the unbroken version!): Download araignee_song.wav

(The author to the song "Araignée Gipsy" is unknown)

The Cat Who Walked Across France After his owner dies, a cat wanders across the countryside of France, unable to forget the home he had in the stone house by the edge of the sea. An unforgettable tour of France.