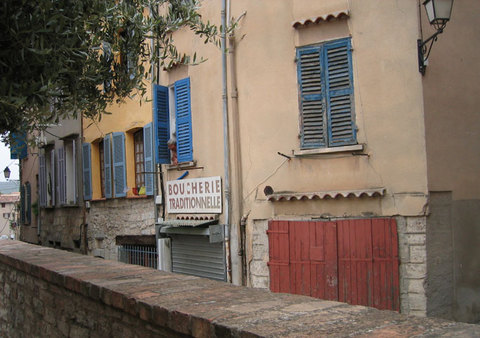 La boucherie/butcher's: a place cocottes, French or otherwise, ought to steer clear of.

In French, cocotte (the feminine diminutive of coq) is originally a child's name for "hen" (coq...cocotte) (in English "cluck-cluck") and has a further two meanings: my sweetie ("ma cocotte") and "tart" (as in trollop or kept-woman).

I was sipping rose petal tea from a dainty tasse* and eating a second slice of lemony citron cake at Dominique's when I learned that a hooker is a cooker in France. "Cooker!" I gurgled, slapping my knee. Considering the heat involved, the word seemed apropos.

Dominique was explaining to Gwen, who'd brought the "cookers" over, that they are also called "poules."
"Well, I could've told you that!" I thought, eyeing the poules from across the room. They looked like hens to me. I could have also told you the French word for "cooker" (cocotte). But what I could not have told you three days ago was that a cocotte is a hooker like a cocotte is a cooker.

Setting our teacups on their silver-rimmed saucers, we studied the "cookers" with their thin, pipe-cleaner legs, soft felt kissers, and pliable bodies (loose bean bags that they were). There they sat, up above the fireplace, long legs dangling over the mantle, watching us eat cake. Can you believe they each wore a fire engine red mohawk? (Or "crest" is it?) Dangling legs aside, these cocottes of Gwen's didn't exactly resemble "les femmes de moeurs légères" or ladies of light morals.

"You can call hookers 'poules'?" Gwen wondered, keeping an eye on her girls across the room as any one in the trade would. The sewing trade that is. As for me, I stood there, cake in hand, hiccupping an old French word with a new-for-me meaning: cocotte! cocotte! cocotte! Fun sounding words have that effect on those of us in the word trade. Cocotte-cocotte-cocotte!

We thanked Gwen for our "hookers"--a thoughtful early Christmas present (and hand-made at that!) and I thanked Dominique for enlightening me on yet another French word. While "cooker" may not be a direct translation for "hooker" in French, you could say that a cocotte is a hooker is a cocotte is a cooker!
*   *   *   *   * 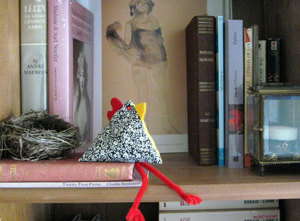 One of Gwen's cocottes, chez moi.

(In the background, one of Rodin's cocottes...)

*   *     *
More on the term sizzling term cocotte:
"(The French have) more words for "working girl" than any other language I know....There's cocotte, horizontale, grisette, demi-mondaine, courtisaine, demi-castor, dégraffée, irregulière, femme galante...At some stage, disconcertingly, the definitions blur, and common prostitutes at the bottom of the ladder become revered courtisans at the top."
--from True Pleasures: A Memoir of Women in Paris

Ongoing support from readers like you helps me continue this French word journal, now in its 18th year! If you enjoy these posts and would like to keep this site going, please know your donation makes a difference! A contribution by check (click here) or via PayPal (below) is greatly appreciated. Merci!