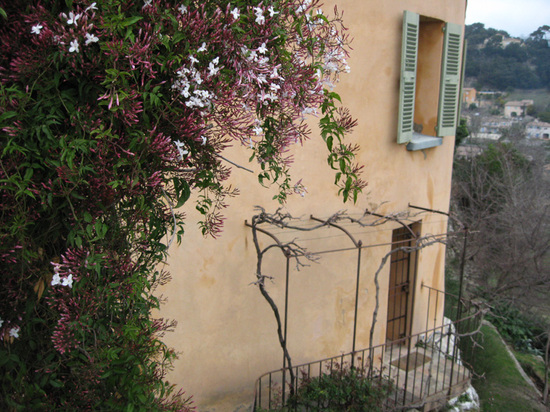 Enjoy life, piane-piane, as often as you can. (photo taken in Biot, France).

--From the Norman dialect "pianopian". Perhaps from the Italian phrase "piano-piano". **Update: the word "plan-plan" ("laid-back"), though an adjective, may be the correct equivalent of "piano-piano"...

Imagine a vine-flanked country road beneath a sky full of clouds as fluffy as crème fouettée.* Now see a silver streak on the horizon, edging closer as our story unfolds. I recognize the car and, on closer look, that's Mr. Delhome behind the wheel. We could call him "le potier," but that would be incorrect. A potier is a potter--something Mr. Delhome is not, though he does putter, and occasionally toil, in his potager or "kitchen garden" (located across the street, beyond a field, and over the stream from his home--yet only ten meters from my own kitchen window).

But back to that silver streak, which is more like a smudge, for it would be an exaggeration to imply that Mr. Delhome drives fast. Neither face-paced or fast-tracked, his life might now be savored piane-piane,* like the slow-cooked vegetables from his garden.

When Mr. Delhome's car comes within a country block (or around a forty vine rows) of my own bagnole,* I send an excited appel de phare.* Monsieur responds by slowing his car and squinting his eyes. He soon comes to recognize "the woman from the kitchen window," who sometimes puts timidity aside to venture out and pick his venerable brain.

"I made the zucchini casserole!" I announce, rolling down my window.
(Monsieur looks confused.)
"...with the courgette* that you gave me the other day..."
"Oh!" he replies, brightening. "Would you like more zucchini?" With that, we each kill our car's motor, step out of our vehicles, and effectively block the one-lane country road.

Mr. Delhome flips the driver's seat forward and I see that there, in the back of his car near a dusty spare pneu,* are more newly picked vegetables.
"I was planning on feeding them to the chickens," he explains, "but they are getting fed up with the same ol' 'soup'. Here, you take them!"

The would-be fowl feed is transported from one car to the other, this to the extreme irritation of traffic, country traffic, that is (all of one car has had the misfortune of encountering the lazy loading zone). The sporty station wagon--beyond my back bumper, not far from where I am loading the chicken chow--is now honking impatiently.

"Qu'est-ce qu'il a, celui-là? What's his problem?" Mr. Delhome complains, only to poke his head back into his car and collect another zucchini or two. Mr. Delhome's nonchalance makes me nervous and I hope he will hurry and gather the produce so as not to keep the traffic waiting.

But Monsieur is neither in a hurry, nor affected by the impatient "traffic". As for the Hurried One, I suspect he needs a good home-cooked meal (to be scheduled into his fast-paced, fast-food life). Which brings me to my own hurries and worries--mostly imagined, though a daily struggle to overcome. The lesson is in those slow-cooked (and -constructed) zucchini casseroles that I've taken to putting together, piane-piane and like a prayer.

Shopping: check out these French-themed items
Cote Sud magazine (in French): "A superbly illustrated decoration magazine about the art of living a sumptuous life in the South of France."
Provence French Linen Water Spray: traditionally used to perfume sheets and a delicate way to add a scent to a room.
Emile Henry's Flame Top Tagine: perfect for brazing, heat conduction and for slow, natural cooking.
"Tune Up Your French"--the book includes tips on how to avoid taboos and common faux pas and is "the next best thing to a year abroad".
Moleskine City Notebook - Paris

A Message from Kristi
Thank you for reading my language journal. In 2002 I left my job at a vineyard and became self-employed in France. "French Word-A-Day" has been my full-time occupation ever since. Ongoing support from readers like you helps keep this site ad-free and allows me to focus on the creative process of writing. My wish is to continue offering posts that are educational, insightful, and heart-warming. If my work has touched you in any way, please consider supporting it via a blog donation of any amount.

Ways to contribute:
1. Send a check
2. Paypal or credit card
3. A bank transfer, a great way to send your donation as there are no transaction fees.