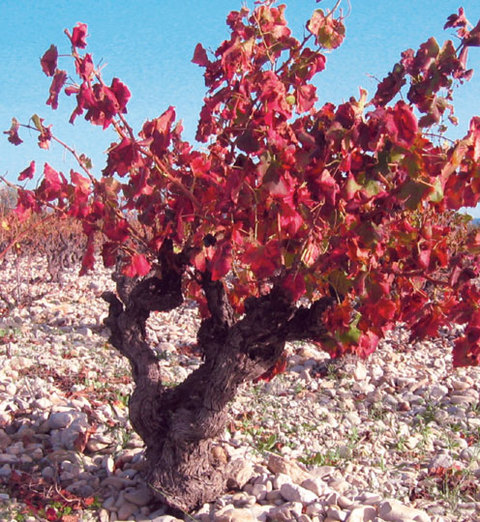 Our vineyard has a new name...more in today's story.

When Jean-Marc asked if I had an idea for a name, I blurted out the first thing that popped into my head: "Rouge-Bleu!"*

Oh, I had my doubts. Once those passed, I had my druthers. After all, I could choose NOT to share the name!

Sharing...it is something I am still learning to do in this marriage: from those canettes* of beer back when we first met...to today's bathwater: "Don't throw it out!" Jean-Marc still protests. I realize that the French are conservationists, but most don't slosh through mud and grapes all day long. It's enough to clog the plumbing! We've since come to a compromise: I take my bath first....

In five years' time, that will surely be one story I will regret having told you. But I can be as bumbling now as I was twenty-five years ago, when I met the original Rouge-Bleu with whom I share this name...and this story.

This name-swapping took place over a well-stocked cosmetics counter where my best friend* (all but 15-years-old at the time) worked after school and on weekends. I used to visit her there at the mall while on my way to my own after school job (hostessing at Coco's diner).

My best friend, with strawberry blond hair to her waist, wore one of those department store frocks. Pinned to the lapel was a gold name tag on which her real name was engraved: "Susan". I might have called her "Suzette"... After all, she did represent a famous French company, this, as the youngest cosmetic clerk in Arizona.

There, at Paradise Valley Mall, we glammed up. "Rouge-Bleu!" Susan said, announcing the color while twisting open yet another tube of rouge à lèvres.* We were fifteen going on forty, best friends trying on wrinkle cream and red lipstick. Our skin was caked after so much preening and powdering. Like cake,
and on hearing the words "Rouge-Bleu," our colorful faces brightened as if lit by birthday candles.

"Rouge-Bleu!" We may not have known the correct pronunciation, but the words played on our painted lips like a premonition. The French words written on that tube of lipstick represented our very raison d'être*: to one day be European! From that moment on, we buried our given names and took up the Rouge-Bleu sobriquet, if only en privé.* We were no longer "Susan" or "Kristi" but united, not by fingers, pricked and bloody, but by the same sanguine color: Rouge-Bleu!

Now we are truly going on forty, no longer fifteen. We wear much less make-up, a little more wrinkle cream, and we're still sharing the same sobriquet. Rouge-Bleu eventually sold enough lipstick to move to Germany and back. The other Rouge-Bleu quit hostessing (hightailing it to France, first chance she
got).

As for the nickname "Rouge-Bleu," which stuck as the lipstick once had, I've decided to share it with Jean-Marc for use on his wine label. Make that "we" have decided: the decision was instant for Susan, who has never had a problem with giving, but has a natural "what's mine is yours" attitude. From the moment she heard the news, she expressed a brand new raison d'être: to share her time and energy by helping out with the first harvest. That's so like her.
.
PS: My best friend, like my husband, is a conservationist; difference is, she knows when to throw sharing out with the bathwater!

*     *     *
This story is for Susan, the original Rouge-Bleu, for reminding me to give without hesitation--and as often as the chance arises.

The lipstick maker that taught me French.
And while we're on the topic of cosmetics, my favorite face cream: