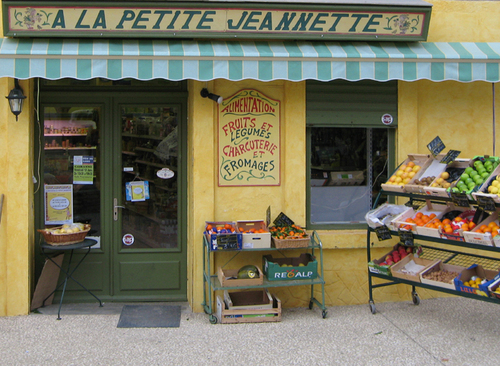 If we are boarding a plane in Paris and flying back to my hometown, Phoenix, it is thanks to Sandy. Sandy, who is a flight attendant, wrote to me for the first time last summer--around the time my grandmother began to spend more time in bed than out of it. By coincidence, Sandy wondered whether I had been back to the States recently to visit family.

In fact, it has been two-and-a-half years since I returned "home," French family in tow. Look up the price of an airline ticket from Marseilles to Phoenix, multiply that by four family members, and you'll understand why.

Sandy, in the emails and phone calls that followed that initial contact, arranged for Jean-Marc, the children, and me to fly from France to America using four of her remaining guest passes. With these passes, the price would amount to $300 per ticket instead of three or four times that. Thanks to Sandy, we will soon be with my grandmother when we fly "home" on Saturday. 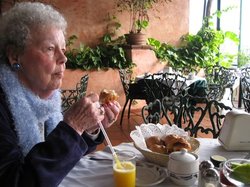 I did not set out today to tell you about one person's unique and generous gesture. Instead, I meant to tell you about my son's new pair of shoes, which he needed for the upcoming international flight. Back to those "buddy" passes, certain restrictions apply--one being not to travel in one's Speedo and one's flip flops. (We've packed the Speedos and the flip flops and will be boarding in business attire.)

Returning, now, to our original word of the day, "godasse" (shoe)... Just last night I learned a new French idiom after a long-suffering Frenchman announced that he no longer had "la tête dans les godasses": that is, he no longer had "his head in his shoes". Things seemed to be "looking up" for him. I feel certain that my Grandma Audrey now knows the feeling.

Jules, my mom, will be flying in from Mexico for this family reunion. She tells me that Grandma is now sitting up in her bed, planning her wardrobe: lining up her lipsticks and pretty dresses, "dolling up" as she would say. In fact, she's in the market for a new bathing suit. You see, after our upcoming visit, she's set her sights on Puerto Vallarta! From there, Jules tells me, they'll conquer France, where Jules has visions of Grandma adding her own farm-girl flair to the French cuisine at our harvest table.

Meantime, my sister, Heidi, is taking care of immediate needs including arranging for a regular Meals-on-Wheels delivery to Grandma. But that doesn't stop our mom from focusing on Grandma's feisty, if fatigued, spirit.

An excerpt from Mom's recent email tells of her selling the "France or Bust" idea to Grandma and hints at Mom's own re-ignited spirit:

"I threw in the incentive that once she was stronger ... we would definitely have to plan on going to France.  Of course, she jumped right onto that idea. She could finally be the Grande Dame of the French Vineyard...  I can see Grandma in our little apartment at your house, Grandma in the director's chair
telling me what to do as we prepare banana cream pie and date nut bread for all of the harvesters. I am going to have to learn to drive ... so that I can take her to the market to shop for whatever she wants to create (with me as #1 slave and sous-chef) for the dish of the day or every-other day..."

"Purpose will relieve her pain," Mom concludes, taking a swift swig of her very own medicine: Hope.

By the way, last time Grandma Audrey flew to Mexico, in addition to her oxygen tank, wheelchair, and Ensure, she had with her nine pairs of godasses! I guess Grandma wouldn't have to worry about dress codes if she were lucky enough to get a guest pass. And she wouldn't mind being seated next to handsome Frenchman, be he in a Speedo, or flip flops, or "all dolled up," as Grandma would say.

One last excerpt from my mom's last email, a passage I almost overlooked so full was I with enthusiasm for what I had just read. Regarding Grandma's visit to Mexico (one my mom is hoping for) she writes: "Time to start cleaning out Grandma's bedroom and finally look at all my junk in there, I haven't looked at it for 4 years.  This is so good for me too.  Everyone needs to be needed."


I will be in Seattle on February 12th. If you are in the area, meet me at Abraxus Books! More info here.


~~~~~~~~~~~~~~~~~~~SHOPPING~~~~~~~~~~~~~~~~~~~
Shoes for Amélie : children's book and introduction to World War II history, inspired by the true stories of families in the Plateau Vivarais-Lignon region of France. It is the heart-warming tale of a young boy whose family who shelters Jewish refugees during the Second World War.

A Message from Kristi on this blog's 19th anniversary
Thank you for reading this language journal. Ongoing support from readers like you helps keep this site ad-free and allows me to focus on writing. My wish is to continue creating posts that are educational, insightful, and heart-warming. If my work has touched you in any way, please consider supporting it via a blog donation of any amount.