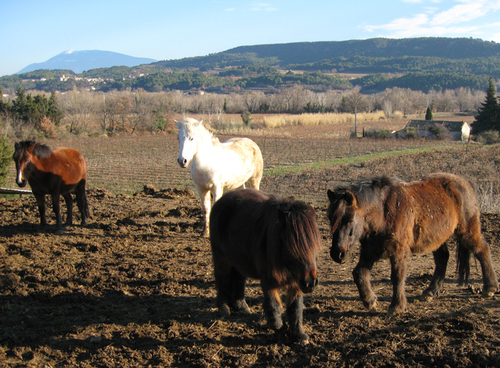 The ponies of Provence stand before Mont Ventoux and a lone French mas.

chahuter (sha-hew-tay) verb
1. to make a racket, to create an uproar
2. to heckle, to tease

"Chahuter" comes from the word "chat-huant" and once meant "to cry like a screech owl." "Un chahuteur" ("une chahuteuse") is a rowdy or disorderly student and "un professeur chahuté" is a teacher who cannot control his class.

One of the best parts of parenthood is watching your children try on hats. My favorites are the hats of courage, generosity, and empathy. And then there are those that leave my heart heavy. Such hats are bulleted, having been pierced by the horns of hell. My daughter wore one of those yesterday.

"Everything okay?" I ask my ten-year-old, who sinks into the passenger seat with a sigh. Her answer is a swift: "No!"
"Did somebody hit you?" I ask, noticing her hand holding her ribs.
"Yes!"
"Who hit you?!"
"No one," she now insists, changing her mind. "Just take me home!"
"Tell me who hit you!"
"It doesn't matter! I want to go home!"

My daughter's defensiveness was suspect, so I followed my hunch.
"Did you say something that might have upset someone?"
"No!"
"Jackie, tell me..."
"Mom! ALL I said was 'Geraldine, c'est ma cousine'!"

My daughter doesn't have a cousin named Geraldine, so I guessed the saying was some sort of code... one that didn't sit well with the Hitter.
"Was it "Geraldine" who punched you?" I asked, fishing for clues.
"Maman!" Jackie said, impatiently. "Just take me home!"
"I will, after you tell me what happened."

When next my ten-year-old whipped up a barrage of false hysterics only to hide herself and her secret behind it, I pulled my car keys out of the ignition. I am familiar with the "Tasmanian Devil" tactic wherein the guilty party creates all-consuming chaos as a way of slipping out of the spotlight of sin. And while she would have me lose my footing, deep-down, my daughter wants my legs anchored to the ground so that she herself won't veer off course.

I stared out the window, wishing for peace to return to the car. Meanwhile, Jackie kicked the side-board, hissing something about her heartless mom. I even quieted my breath, lest the seconds of peace that were slowly returning be disrupted.

I was a mean kid once. I made Spittle Shake for "Donna", who wore thick spectacles and had knots in her hair. Some thirty years later, more than sorry, je suis navrée.* What had led up to that evil, edible "experiment"? Or am I mean at heart and, more importantly, did I pass this trait on to my daughter?

I wondered about name-calling when Jackie told me that the culprit wore glasses. Was my daughter the perpetrator, after all? Had she, in saying the purported insult "Geraldine, c'est ma cousine," taunted a classmate with what might be the French equivalent of "Four-Eyes"?
"No, Mommy!" Jackie protested she hadn't said it... at least not to her face....

A back door of the car opened with a cheery "Hello!" Max was out of school and would, minutes later, piece together his sister's story....
"Oh, her," he said, of the Hitter. "I'm not surprised she hit Jackie. That girl is mean to everyone!" he confirmed.

"Maybe she is mean because she is sick of being teased?" I said, in an attempt to restore order and justice. Still, my daughter was hurting physically, and, beneath the facade, morally. But what was, after all, the moral to this story? What was I to say to my daughter, who had tried on the "bully hat" only to be bullied back? Should I say "two wrongs don't make a right?" or... "Turn the other cheek. A kind word turns away wrath? Love your enemies? Do unto others"...? Perhaps a Spittle Shake maker shouldn't preach. Instead, I said what my heart felt:

"Are you sorry?"
My daughter looked down to the floorboard of the car and only then did her bully hat fall off. Hats off to her, I say, for her newfound humility... and to Donna, for forgiving me.


~~~~~~~~~~~~~~~~~~~Shopping~~~~~~~~~~~~~~~~~~~~
Caudalie Beauty Elixir : Part-toner, part-serum mist of essential oils and plant active ingredients. Smoothes the skin, tightens the pores, and provides an instant burst of radiance, as it stimulates microcirculation. (I keep a bottle of this in my purse and on my desk!)
Vive les verbes français! Sure, you can parler français. You can even converser en français. But can you also jacasser (chatter), radoter (ramble on), cancaner (gossip), and faire du boucan (make a racket)?

Goldilocks in French (with accompanying CD) presents an engaging reading of Goldilocks and the Three Bears in both English and French that will entertain kids while they hear correct French pronunciation. You can read along with the narration or learn along with your kids!

Ongoing support from readers like you helps me continue this French word journal, now in its 18th year! If you enjoy these posts and would like to keep this site going, please know your donation makes a difference! A contribution by check (click here) or via PayPal (below) is greatly appreciated. Merci!