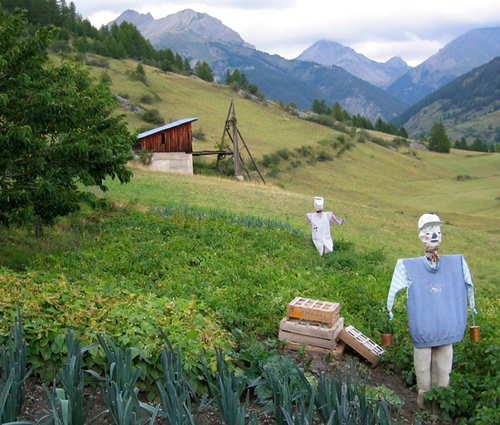 (Note: as promised, we return now to the calm, slice-of-life stories from this wind-blown wine farm. Meantime, I'm working on Chapter One of the "other" story (so as not to say "anti-story"): a behind-the-scenes script of this fluffy French existence: who knows if, or when, such a book will ever see the light of day or whether some stories aren't best left to bask in the cool shade of an incognito garden. Back now to the regular postings from Provence... and to today's sketch):

Returning home via a rosemary- and olivier*-flanked driveway, I noticed the Citroënette* parked across from our wine cellar, just next to a few piles of woody sarments* destined to become compost. (Cuttings, I might add, that I am forever backing into by car, only to track a "chorus" of the branches out of our driveway each day, arriving to my destination, pre-announced, and no thanks to the honky-tonk racket of vagabond vines voicing their complaints from behind me. Must be hell to be dragged into town by the tips of your woody toes).

Aunt Marie-Françoise, the driver of the Citroënette, was seated at the kitchen table, sharing hibiscus tea with Jean-Marc. "What have you got in that sack?" they wanted to know. I tried hiding a few of the seed packets (after the sunflower seed incident a few posts back), as a housewife might hide a few of
the sundresses she's just bought after one too many lunchtime martinis), but with four eyes fixed on the shopping bag, I was unable to shove the merchandise into a closet, behind any camouflaging coats.

One by one, I pulled the seed packets from the plastic sack. There were future crunchy radishes, melt-in-your-mouth betteraves,* cocktail onions, "Reminiscent of My American Roots" Corn, Charentais* Frenchy melon, sweet peas or "pois de senteur," Not-So-Loopy Lupine, Trailer Park Petunias, and the sunny marigolds that my mom once planted alongside them.

I studied my family's faces as they set down their cups of hibiscus and I could just swear they were thinking that French pigs would surely fly before the desert rat standing before them would succeed at poh-tow-zhay* gardening. Now that's paranoia for you.

(In the next installment, or maybe the one after that, Marie-Françoise shows me the edible plants and flowers that are already growing in my garden. Stay tuned.)
.

Read The Edible French Garden (only 19 copies left, minus the one I just bought...) and Kitchen Gardens of France

Vedrantais Charentais Melon (the real cantaloupe) 10 Seeds - Heirloom. Charentais-type melons are the real cantaloupes, born in Italy and refined in France. The skin is uniquely colored, and ripe melons don't slip from the vine. The fruit inside is rich orange, sweet and deliciously fragrant.